One lobe of Second Wave feminism was the Goddess Movement. Proponents posited that there had been a stage of historical development, in Europe and the Mediterranean at least, where the dominant image of divinity had been female. It was controversial from the start and the level of intellectual rigor behind the argumentation for it basically doomed it to obscurity. But it is still worth examing for the larger lessons it offers.

A corollary to this assertion of a female overgod was that these societies had been naturally peaceful, because that’s inherent in femininity or something. One example adduced was Minoan civilization, with its Mother Goddess and cities without walls, taken as proof that warfare was so rare as to require no special defensive fortifications. (Yeah, well, Washington DC doesn’t have any walls either….)

This is a standard image of the Minoan Mother Goddess. It’s probably quite familiar by now.

Along with the Great Mother/Snake Goddess bulls were a very important symbol in Minoan culture and religion, and a form of sport that involved jumping over bulls by grabbing the charging bulls horns. Yee hah, coming to a rodeo near you. Don’t hold your breath. At least that’s what some mural depict; it looks so difficult as to be impossible.

Minoan culture produced beautiful statuary featuring bulls and stylized bulls horns were a standard decorative form along the tops of walls at the palace at Knossos and they always were a fixture on altars – “the horns of consecration”. Note the connnection between bulls and sacrifice.
The myth of the Minotaur reflects the importance of the bull in that religion. 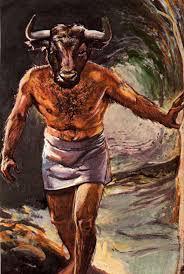 Another aspect of the importance of the bull was the bull sacrifice. The story of Theseus encodes the bull sacrifice under its overlay of human sacrifice. The Athenian youths are sent to Knossos to feed the Minotoaur, yes, but after all it is still the bull that ends up dying. This is the kind of patchy reconstruction we should expect after that story has come through a span of centuries and a dark age as part of the overall Bronze Age Collapse in the eastern Mediterranean.

The Minoans prospered at the heart of a thalassocracy that spanned the Mediterranean. I have heard them credited with spreading cultivation of the olive over the entire region. Perhaps some other aspects of ther culture endure in these far reaches as well.
Oh dear – bullfighting. How barbarous and brutal! Surely the naturally nurturant religion of the Great Mother could have nothing to do with anything like that! And notice how again it’s the bull that always dies.
In the Minoans’ defense, a much milder form of the sport survives in southern France.
A much better attested female-oriented religion was the mystery cult of Adonis. Mystery cults in Roman times were the preserve of women. Christianity was a mystery cult in the beginning and this held up its full social acceptability for generations. And what do we find in this cult tailor-made for women? We find the myth of Adonis, whom Aphrodite takes as a lover when she looks down from heaven, and who dies as a result of this connection.
What a treasured teenaged fantasy – the hot young man dying for love! How romantic it all is! And the crucial part is that he has to suffer and die to give the story some juice, to give the listener someone to moon over and pine over. Country Joe and the Fish nailed this one not so long ago.
So these female religions are all nurturant and peaceful, as long as you’re not the one on the receiving end of all the fevered fantasies.
The Goddess Movement is largely forgotten in internet feminism, if it was ever known at all, but it has diffused into the gender discussion. You hear its echoes all over – the way every issue is discussed in terms of how it impacts women, the way female victims are identified as female while males are degendered and borgified into either non-males or non-victims, the way gains for women and girls are gains whereas gains for men and boys somehow always threaten women…If it seems implausible that the Goddess Movement should have such influence despite its short duration the larger feminist movement, it’s not really strange at all. It’s not at all strange because it fits so perfectly with the general gynocentric orientation of the culture, which measures a “Real Man” by how useful he is to women. So examining the Goddess Movement and its narratives is an important part of any gender discussion that hopes to be at all through.
The Goddess Movement and its assertions were controversial from the start and the level of intellectual rigor behind the argumentation for it basically doomed it to obscurity. But it is still worth examing for the larger lessons it offers.